Please feel free to contact us via any of the details below, or use the form on the right & one of our customer service team members will get back to you as soon as possible.

If you’d like to drop in to our yard our qualified team will be more than happy to assist you. Our Office hours are:

Pigdon Motorsports all fired up 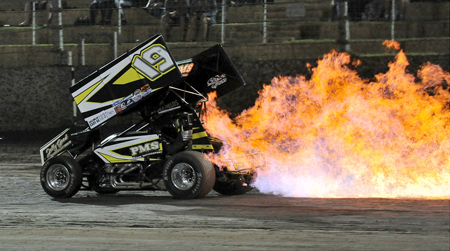 “I JUST thought the fireworks have come early,”

Trent Pigdon joked after his car erupted into flames when round eight of the AHG Sprintcar Series was held at the Perth Motorplex on Boxing Day.

But it was no laughing matter moments earlier for the Pigdon Portables pilot who did a great job to get his car as close to the fire crew as possible after it appeared his fuel tank had split.

Pigdon was running high on the track coming out of turn four and was avoiding a crash involving Troy Beckingham and Kye Scroop when it appeared he was tagged from behind by Shane Norris.

The back of the car very quickly erupted into flames and as Pigdon steered the car along the front straight and to the fire crew he left behind a trail of flames on the track.

“That was pretty scary,” Pigdon told the big crowd in the house for the annual Boxing Day Bonanza.
“The whole cab was fuel of flames.”

And this all with the front wing peeled back in the latter stages.

“It was pretty tough out there actually,” Pigdon said immediately after the heat win.
“It was good until the front wing came off.

“Hopefully we can carry it onto the feature.”
Unfortunately he was not able to finish the feature race, bowing out after just 12 laps.

Pigdon will be looking to make amends when he contests round nine of the series at Quit Bunbury Speedway this Saturday night.